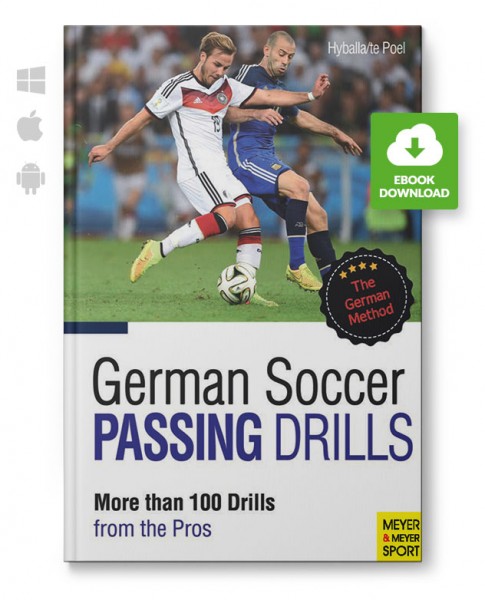 More than 100 Drills from the Pros

Train like the World Champions! Over the past few years, a new trend has become ever more prominent in the soccer world: passing often and fast, and including all players in the game. Combining this with their own personal style, we have seen teams reach new heights of success from FC Barcelona to Bayern Munich and Borussia Dortmund and, most recently, the German National Team at the 2014 World Cup in Brazil.

But what does it take to learn this ‘art’ of passing? What are the methodological and technical requirements for becoming the new Schweinsteiger, Messi, or Neuer? In this book, the only of its kind, two German League certified coaches have created the ultimate guide to passing. Using the “Hyballa-te Poel-Passing-Puzzle,” they present every type of pass there is in modern soccer, with lots of drills for each type. From the goalkeeper to the center forward, everyone can learn passing with these exercises.

All ball circulation is based on a good passing game. Many recent examples show that this can result in successful top-level soccer. Within the scope of their playing philosophy, even the national team constantly works on the passing game and combines this with group and team-tactical measures. To implement variable and efficient team play at the highest level, teams must be able to quickly open up space. In particular, this can be done with precise, well-timed, flat, hard, and vertical passes.
A successful passing game relies on foundations laid by targeted, variable, and intensive training. Training units on the field are extremely important for coaches and players as their teams evolve and try to reach the highest level. In German Soccer Passing Drills, Peter Hyballa and Hans-Dieter te Poel lay the foundation to develop a successful passing game.
In this book, the authors examine many types of passes and performance factors that can lay the foundation through training. As such the book German Soccer Passing Drills is a training model and is a true mine of information for any coach.
In 2015, the authors Peter Hyballa and Hans-Dieter te Poel published a second German book on the passing game. This work includes contributions from experts of the most diverse areas of performance-oriented soccer and applied sports science. The different perspectives of the what and how in the international passing game are presented using focused interviews; there is also a large number of additional drills and different types of plays.
Together these two books represent a handbook for all coaches and trainers with an interest in relevant, detailed, and intensive goal-oriented training and the advancement of their players.
Hans-Dieter Flick